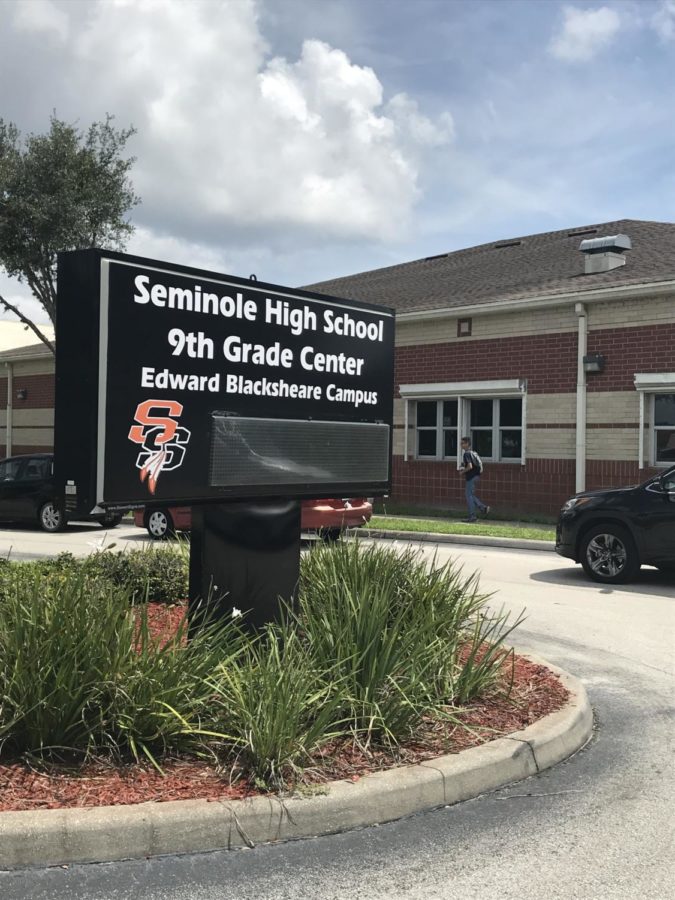 The bus ride to the NGC is part of the daily transportation hassle.

The Edward Blacksheare Campus, commonly referred to as the Ninth Grade Center (NGC), has proven to be a blessing for some and a headache for others. Although it was built for the purpose of accommodating the yearly surge of freshmen, transportation has been one of its greatest challenges.

To connect the two campuses, shuttle buses have been implemented to ferry freshmen between the centers and to bring upperclassmen to their buses, half of which are now parked in the NGC. There have been considerable growing pains thus far.

However, there have been several successful NGCs in Central Florida, including Colonial High School and Winter Park High School. WPHS was able to successfully implement a transportation system that allowed not only freshmen, but all of their student body to be able to get home more efficiently.

“Although there were a few bumps in the transportation [at first], it was typically very smooth,” said Uma Menon, a junior from Winter Park High School.

With time, it is hoped that SHS’s NGC will also improve to become smoothly integrated, bridging the two worlds of SHS. In the meantime, however, it is a day full of logistical struggles, starting at 6:35 a.m.

Thanks to the NGC, each morning, sleep-deprived students are greeted with the sounds of birds chirping and cars honking. The pileup of buses and cars congesting the intersections surrounding the main campus has resulted in irritated parents and students, especially in the dreaded Airport Blvd.

“If you get to the traffic signal on Airport Blvd anytime after 6:35 a.m., there’s bumper to bumper traffic, and it will take ages to park. There have been times when I’ve been late to school just because of one traffic signal, even though I arrived at the signal with time to spare,” said junior Harris Khan.

Transportation in the morning also adds an unnecessary stress for freshmen who have their first periods on the main campus. After their classes, most students have to make the trek to second period, comedically dubbed “The Trail of Tears.”

“After first period, they only have one bus [to the NGC] for the first 40 people that get there, and the rest of us have to walk [to the NGC]. It’s not actually safe since we are technically walking in the open, and the gates on the other side are open,” said freshman Deepika Kannan.

While there is usually a bus available to transport freshmen to the main campus for fifth period, the staggered schedule between campuses causes them to be ten minutes late to class each day.

“I have AP Computer Science for fifth period, which is a college-level class. So it’s a problem if I miss the first ten minutes of college-level instruction every single day,” said Kannan.

While this ten-minute delay was implemented to give buses time to travel from the main campus to the NGC, the consequence is that students “lose time” when making the reverse journey. In other words, they will always be ten minutes late to the main campus, leading to an inter-campus “jet lag” of sorts.

Unfortunately, the struggle doesn’t end in the morning; once the dismissal bell rings, new problems arise. After upper-class students get on their buses at the main campus, they have to pick up students from the NGC, as well. This additional stop has added approximately 15 minutes to students’ return journeys.

From a sample of 62 students on the main campus, 85.4 percent claimed that since the establishment of the NGC, they have gotten home “considerably later.” Furthermore, some students must take a shuttle bus from the main campus to the NGC in order to get on their designated bus.

“It’s unnecessary and somewhat stressful. They add an entirely extra step in the process of getting home,” said junior Julianna Johnson.

Traffic is yet again a prevalent issue in the afternoon. The bus loop intersects the Tribe and pool parking lots, which results in congestion because buses and cars are attempting to leave at the same time. The congestion can get dangerous near the Reservation parking lot around 2:20 p.m., because students’ cars, freshman parents’ cars, and ninth graders on foot must all compete for space on the narrow Live Oak Blvd.

“This backup results in very slow-paced movement around Rservation since main campus parkers, reservation parkers, and those picking up freshmen are all trying to leave at the same time,” said senior Vy Nguyen.

Though students on the main campus claim the NGC causes transportation issues, there are no problems in the eyes of the 1400 freshmen. In fact, transportation is very easy for them in the afternoon.

“It only takes about ten to fifteen minutes for me to get on the bus. After that, we just leave,” said freshman Srujan Kodhathala.