A TRIBUTE TO CHADWICK BOSEMAN 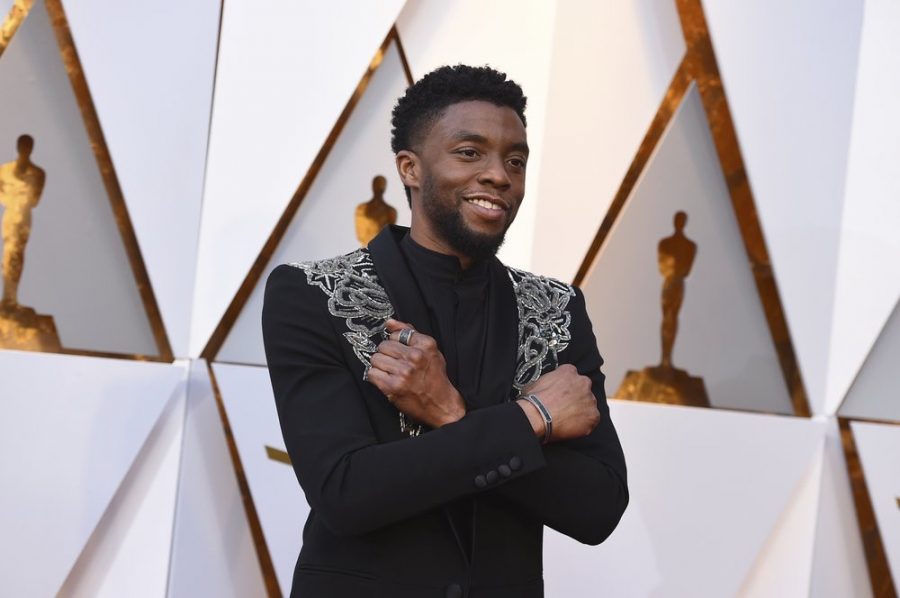 On Aug. 28, 2020, renowned actor Chadwick Boseman passed away. Battling against colon cancer, Boseman died at the height of his career at age 43. Fans were both heartbroken and surprised. His family disclosed information the following day that Boseman was diagnosed with Stage 3 colon cancer in 2016. Through chemotherapy and treatment against his deadly disease, Boseman continued to impact the world on-screen as a superhero, cop, vigilante, and crime-fighter. In fact, the past four years of films showcased some of his best acting skills.

Boseman’s most well-known role was in the Marvel Cinematic Universe, in which he played King T’Challa or the fan-favorite warrior avenger, Black Panther. First starring in Captain America: Civil War, he shocked audiences with his guest appearance. Fans of the Marvel universe were in awe and even further elated when Marvel produced a solo movie in 2018.

“When I first heard [Boseman] was getting his own movie for Black Panther, I was surprised and excited in the best way. He was the first black superhero in the Marvel movie franchise to have a solo movie and his role brought more diversity among the Avengers,” states IB freshman Ananya Vishwakarma.

The cultural masterpiece was praised for its depiction of African culture and even scored seven nominations for the 91st Academy Awards. In addition, it broke the box-office, earning over $1 billion worldwide in just twenty-six days. Boseman continued his role in Avengers: Infinity War and Avengers: Endgame, which both annihilated box-office records.

His death broke the hearts of his fellow actors. Stars including but not limited to Mark Ruffalo, Robert Downey Jr., and Chris Evans were quick to send condolences through Twitter to Boseman’s family. Marvel even released an emotional tribute containing interviews with his Marvel colleagues detailing Boseman’s ability as an actor, friend, and hero.

Boseman’s acting career is not limited to the Marvel franchise. He has starred in multiple hit movies in the past decade and numerous tv shows as well. Some of his most popular movies from the past four years include 21 bridges, Da 5 bloods, and Marshall. One thing those movies all have in common is his ability to seamlessly fit into the role of heroic and iconic figures. Over the course of his career, Boseman has played Jackie Robinson, Thurgood Marshall, James Brown, and as mentioned before, Black Panther. All of these well-suited roles brought audiences to tears as Boseman’s ability to truly portray them never failed or faltered.

“He played powerful characters that inspired not only African Americans but other minorities as well” affirms IB freshman Maunickaa Sureshkumar.

Besides his acting career, Boseman was heavily involved in charity work and spoke out as a public figure. He used his role as Black Panther to promote the #BlackPantherChallenge, which aimed to give more Black children the opportunity to see more actors like them on-screen as heroic figures. In light of current events, Boseman was also an avid, outspoken supporter of the Black Lives Matter (BLM) movement. Using his status as a famous actor and public figure, he donated to multiple charities and used his social media to talk about the abusive culture of anti-blackness online. He also signed a letter addressed to Hollywood to recruit and promote more Black people and stop supporting police violence. His humanitarian work is just as worthy of praise. Besides donating to multiple charities, he helped launch Marvel: The Universe Unites campaign with his fellow Avengers. The campaign aims to support charities for children. The noble cause enabled many terminal cancer kids to be able to view the Avengers movies earlier and meet the heroes involved, as well as receive a package full of toys related to the heroes.

“Rather than getting caught up in the newfound fame, he used it to positively influence the world around him, involving himself with charities and more. He also became a role model to little kids everywhere” compliments Sureshkumar.

Chadwick Boseman was a wonderful friend, actor, husband, and hero to all.

Even in death, his influence on the film industry and audiences everywhere will remain intact.