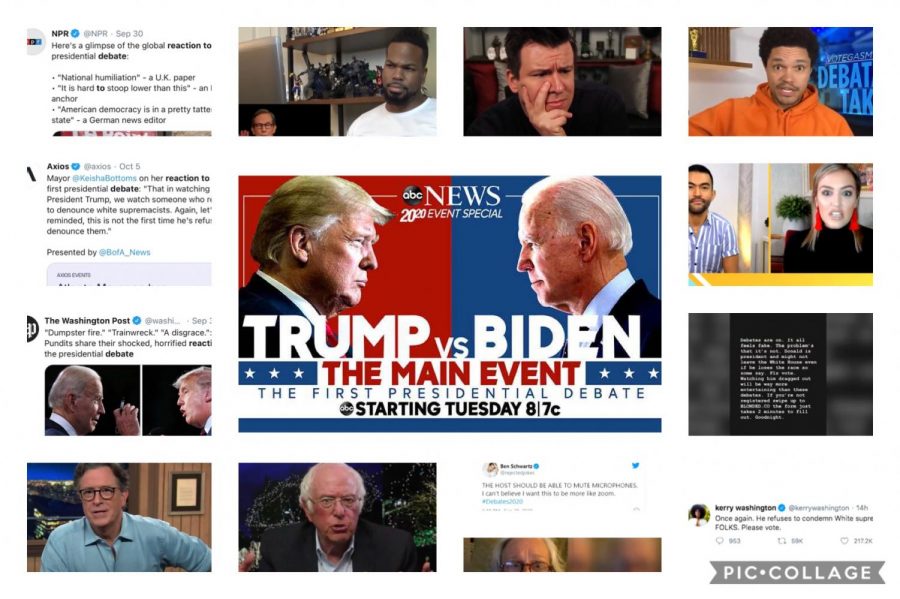 The presidential debate between President Trump and Biden sparks outrage all across America. Spectators have described it as ‘laughable’ and ‘unprofessional’ for both parties. In addition to America’s very own citizens, other countries have also voiced their thoughts on the disastrous debate.

The regrettable nature of the first presidential debate of the year brought dismaying and solemn reactions for all people watching. The candidates, Joe Biden and Donald Trump, were supposed to clarify their political opinions, plans, and policies for potential voters professionally and respectably, that of debate decorum. However, the result was disheartening and embarrassing for Americans as the two candidates heckled each other the entirety of the debate

“It was like watching a competition of who can talk louder than the other,” compares IB sophomore Lucy Guo.

The essence of the debate shocked much of the country, embarrassed at the thought of American democracy, and scared for future years. The two candidates ridiculed the nation with mediocre insults and pettiness, similar to that of two kids fighting. However, America is not the only nation to agree on the fact. The entire world was watching the debate, and everyone had similar reactions and thoughts. All news podcasts and reporters had somewhat of the same description for the debacle of the debate, stating similarly that the nature of it was distressing.

For instance, in the countries of Europe, analysts and news anchors discussed the flaws of American democracy as indicated by the debate. They stated that if the democracy was out of control, it was Trump’s fault as he was the president. The political power behind the debate is getting out of hand; it is overpowering simple morality. French analysts finished their description off by stating it was “chaotic” and “rowdy.”

Amber Ni, an IB sophomore, believes “The debate affected the way others view America. I believe that most countries view America as a joke now. The two candidates’ behavior reflected poorly, making us look weak or bad.”

Other countries had similar thoughts, believing it was unprofessional for grown men to call each other “idiots” and “not smart” on live television. Russia stated that rather than taking the high road, both candidates exchanged insults instead of having a sensible discussion. They furthered their claim when highlights of the debate showed up on the internet, displaying unprofessional behavior. Many talk-show producers, including Jimmy Fallon, even took to their shows to talk about the “mess” of a debate. A majority of the time, the moderator had to interrupt and tell either of the candidates to let the other speak just for a minute, if at all.

India had relatable impressions. Similar to Russia and Europe, the media believed the U.S. embarrassed themselves for over an hour. The most influential media group in the country compared the presidential debate to mud-slinging.

China had little to say about the debate, despite Trump referencing the country multiple times to blame it for both COVID-19 and economic problems. However, some of its citizens emphasized how the president repeatedly condemned China, while others took to Twitter, stating the debate reflected the political, moral, and social divisions of the U.S.

Many other countries discussed the blanks and problems in the debate. One common topic of discussion was the statement about white supremacy. Trump had stated that white supremacists should “stand back and stand by” when asked for a statement condemning their actions. All media and analysts agreed that this was a major fail on the president’s part. Considering current events, he should have taken the topic directly rather than evading it with a statement. His failure to condemn white supremacists did not elude anyone, sparking outrage among Democrats and some Republicans alike in the U.S.

No matter, the opinions of different countries, however shallow they may be, are detrimental for diplomatic relationships.

The opinions of countries are significant. It is of interest to consider them when telecasting such an event, the mentioned presidential debate. In the future, the candidates should practice professional behavior and courtesy, while avoiding childish actions exhibited previously.