Penguins and COVID: How Missouri Does Quarantine 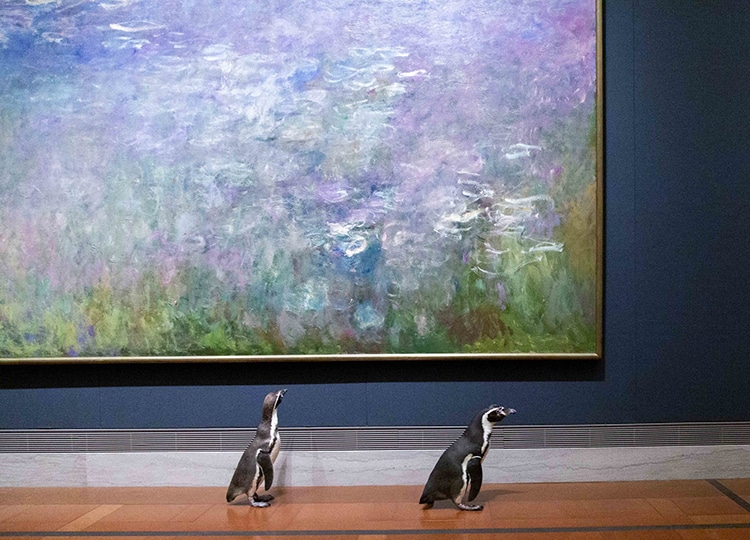 In Missouri, penguins from the Kansas City Zoo were allowed to roar the halls of a local museum. Although there are different opinions on whether they should have gone or not, the penguins seemed to enjoy the outing. Source- My Modern Met

As the COVID-19 pandemic caused businesses to close down to the public, people felt dejected not being able to visit the fun attractions. While everyone else may have been stuck at home, a few penguins went on an adventure. In Missouri, the Kansas City Zoo allowed a few penguins to visit the Nelson-Atkins Museum of Art, and they enjoyed it very much.

It started at the beginning of the lockdown, when the Shedd Aquarium in Chicago allowed a few penguins to wander around the aquarium. The Aquarium was closed, so the penguins were safe to travel within the area without fear of any complications from the virus. The penguins were let out to make sure they were entertained without the busy crowds they were used to. This new experience allowed the penguins to act more natural in a larger environment, as well as learn and use new skills. The penguins also were able to visit some of the other animals in the Shedd Aquarium, while staying out of the other animals’ exhibits and in the guest pathway to ensure safety.

IB Senior Alura Vasquez thinks “no animal should be completely alone, and letting some animals go to the museum to feel better is a good idea.”

However, Neal Chauhan, another IB senior, has a different opinion; “The animals wouldn’t understand a concept of a museum, and if no one is allowed to see the animals, then that seems to defeat the purpose of letting them out.”

Both perspectives have strong points, especially since the Kansas City Zoo had the museum adventure idea start as a joke, but eventually realized it might actually help the penguins. This expedition led the zoo to plan a day in the Nelson-Atkins Museum or Art for three of their Humboldt penguins. The art museum, as well as the zoo, were also closed due to the pandemic, so this collaboration between the two allowed these businesses to continue to gather profit during an economically challenging time. The penguins, like in the Shedd Aquarium, were also feeling the effects of the quarantine with the sudden lack of interaction with people other than their caretakers and trainers. They hoped visiting the museum would lift the penguins’ spirits. With the halls of the art museum empty, the three penguins were free to roam and take in art at their own pace, supervised, of course, with the cameras installed in the museum to promote the safety of the penguins and the protection of the famous art pieces. The caretakers of the penguins made sure to follow closely as well.

The museum featured artwork from the Baroque and Impressionist movements during this visit, which the three penguins more than appreciated; they had a particular eye for the Carvaggio and Monet pieces. The director of the Nelson-Atkins Museum, Julián Zugazagoitia, wanted to expose the penguins to Monet’s “Water Lilies” in hopes that the soothing ambiance in the painting would help the penguins feel more at ease. The penguins preferred the Baroque pieces, however. Zugazagoitia theorizes the warm, red walls of the room the pieces were in, or the tendency of Baroque paintings to depict humans drew the penguins in and gave them a sense of comfort. He spoke to the penguins in Spanish, to connect to their Peruvian origins, and was surprised to see how the penguins seemed to be listening and learning about the art. Zugazagoitia also found out the penguins paid the same amount of attention and interest to the paintings as the human guests.

As the pandemic is still going on, it’s good to see zoos are attentive towards the needs and behaviors of their animals, and taking action to make sure they are comfortable. It’s also important to remember that there are many safe ways to get out of one place for a healthier mindset while taking precautions for the virus.