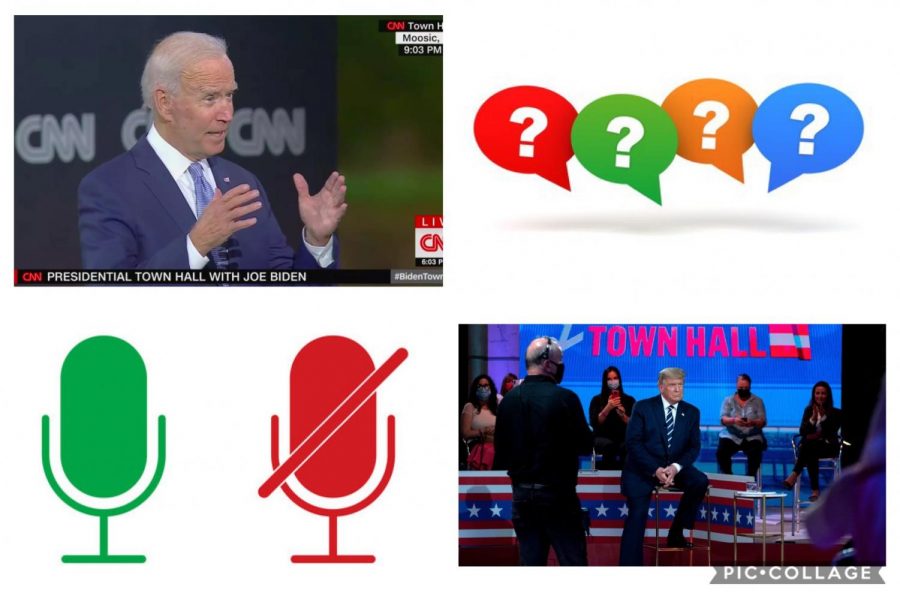 After the COVID-19 outbreak at the White House and the president’s infection, whether the second presidential debate was going to happen was up in the air. Questions of safety were pertinent. When the debate was moved online to keep everyone safe, President Trump said he would not participate despite his dismal poll numbers. The debate was, again, up in the air. Then, on October 9th, the Commission on Presidential Debates canceled the debate. Biden scheduled his town hall with ABC News on October 15th at 8. Trump decided to schedule another town hall at the same time in retaliation. Instead of bipartisan debate, United States voters received two warring town halls to pick from.

Mallika Satish, an IB senior, sees two town halls as “indicative of how our political system has fallen off the handle. It’s just not productive. It shows that we’re moving away from focusing on policy to making a show out of it. I didn’t even expect this to be possible because that not how it works. It defeats the entire purpose of a town hall debate.”

Presidential debates are a great time for candidates to talk to voters since voters from all sides of the political spectrum traditionally watch debates. Candidates get to talk to supporters, undecided voters, and people who do not like them. They can energize their supporters, communicate their platform, and bring people to their side. Debates often force candidates to answer difficult questions they did not cover in previous speeches. The voters can see how candidates behave when faced with people who disagree with them., as well as what the candidates believe in to make their decision at the voting booth.

The original debate was going to be a town hall format, as well. A town hall allows voters to ask questions directly to candidates. Additionally, it allows candidates to connect with their supporters and undecided voters. These connections are vital for undecided voters, people both candidates need to win over. Polling numbers have not been in Trump’s favor recently, making this town hall debate essential. The town hall format was preserved, but the candidates were no longer able to respond to each other.

The Biden town hall covered a range of topics from a variety of people. Biden was again asked about court-packing. He refused to answer until he saw what exactly was going to come out of the Senate hearings, but he promised to have an answer on the subject by election day. He shared his opinions with the audience, expressing concern about the future of LGBTQ+ rights and making his case to the Black Community. Biden made personal connections to everyday Americans by bringing up stories about his life and family.

“Biden is able to connect with voters because he addresses the American public. He realizes it’s not a popularity contest he’s winning for himself. He is vying for the presidency.” Satish said.

On the other hand, Trump’s town hall included far more time debating with the moderator at the beginning. She questioned him about his COVID testing regime, in which he revealed he had been tested often, but not every day. He dodged questions about testing before the debates. She then probed about his denunciation of white supremacy, which he failed to denounce during the first presidential debate and denounced later in an interview. He became extremely frustrated at these questions, and this frustration continued as the moderator asked questions about Qanon. He refused to deny the conspiracy theory that proposes the democrats are a ring of Satanic pedophiles involved in a deep state, QANON. He refused because he claimed he did not know what it was despite the moderator explaining it to him. He tried to connect with the voters but failed in many ways. He came off as cold and uncaring, particularly in his discussion of COVID-19, and he repeatedly blamed China and congratulated himself on his administration’s response to the pandemic. He also made false claims about the US’ progress in containing it, citing numbers that would have been the death toll if the government did not take action. They also discussed a transfer of power, and instead, he turned the discussion to voter fraud. The voters’ questions led to discussions about healthcare, the pandemic, civil unrest, and other issues. He failed to connect with voters in many ways, but some new information was unveiled.

The next debate will feature different rules, including muting microphones and will, hopefully, take place on October 22nd as planned. Much more is to be seen in this upcoming election.