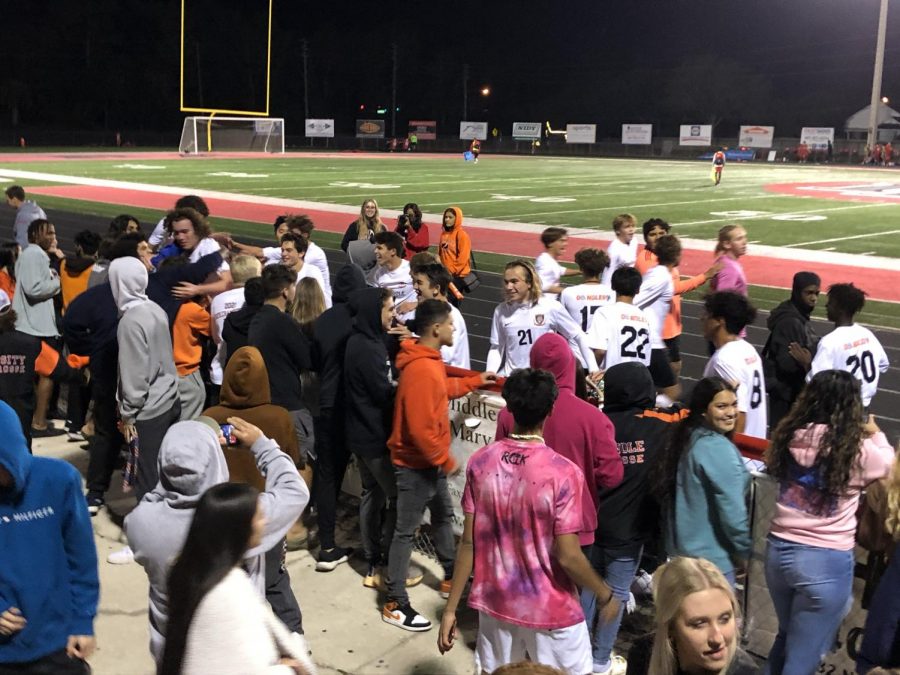 As Seminole end their game with a win, the crowd greets them at the fence for celebration.

Seminole defeats the Lake Mary Rams once again this year in another sport: soccer. The Seminole Boys Soccer Varsity team, with a win of 1-0, gains another win for Seminole this 2021-2022 season.

The game was definitely an intense one. Many fouls were given to both teams, and the only goal was scored in the last quarter. Seminole started the game on a rough note, gaining fouls on #16, Benjamin Burry, #4, Emiliano Benfanti, and #9, Evan Stephans. The intensity only rises as the game progresses. Stephans breaks through Lake Mary’ defense, bringing the ball up the left side of the field and attempting to goal. However, Lake Mary’s goalie picks it up. The Rams run straight to take the goal kick, taking the advantage as they advance downfield, but get shut down by our #2, Eric Zhu. He takes it away and passes towards Stephans, who does a beautiful cross to the middle, where #6, Ethan Stephans takes a shot. Unfortunately, the referees called it offsides, so the game remains at a standstill. The brothers keep these shots coming as Evan Stephans attempts another shot on goal soon after. The first half of the game is over.

As the game enters the second half, Seminole has a close chance at a goal when a corner kick occurs. Seminole players keep up a rough game with Ethan Stephans getting a foul, which is recovered by an attempt at another shot on Lake Mary’s goal. The Rams return the aggressive play with Lake Mary getting a yellow card. As Seminole gets the foul kick, the ball is taken up the field. There is a great cross from Zhu, but Lake Mary takes it back and dribbles to the goal quickly. Benefanti makes a fantastic save, stealing the ball back and bringing it back to Lake Mary’s side. Ethan Stephans attempts another goal. From the goal kick, the rams go downfield, Evan Stephans does a good slide tackle, but gets a yellow card. Then, our forward #10 Juan Pablo Ruiz, takes a shot on the goal. Our #8, Santiago Tafur, roughs it up this last half as he gets 2 yellow cards. Yet he still plays hard, not letting the cards affect his play as he takes it upfield and attempts to score.

After the game, Tafur, a Seminole senior, states: “Both sides were rough, it all just depended on what the referees called”.

Seminole keeps the shots coming as Ethan Stephans takes another shot and it goes in, However, it is once again considered offsides. But, Seminole keeps it up with a goal onside, with Ruiz getting it in. With the score of 1-0, the game continues with Seminole keeping their defense tight, shutting down all Lake Mary’s last chances to score as the game comes to an end.

The game ends and the players round-up and talk post-game with the coaches. Our Seminoles come running to the stands and the people surround them, resulting in a big huddle of victory.

Ethan Stephans, a Health Academy Junior, states, “My favorite part was after the game was when we went to the stands and everyone was cheering us on”.

The moment was the best way to add another victory against our rivals!

Overall the game was very intense, with Seminole keeping the ball in their control for the majority of the game.

Ethan Stephans states, “the team played well…we were connecting our passes and being aggressive”.

Seminole was good at finding open space and keeping possession. It was a very clean and well-organized game, showcasing our Boys Varsity’s talents amazingly.