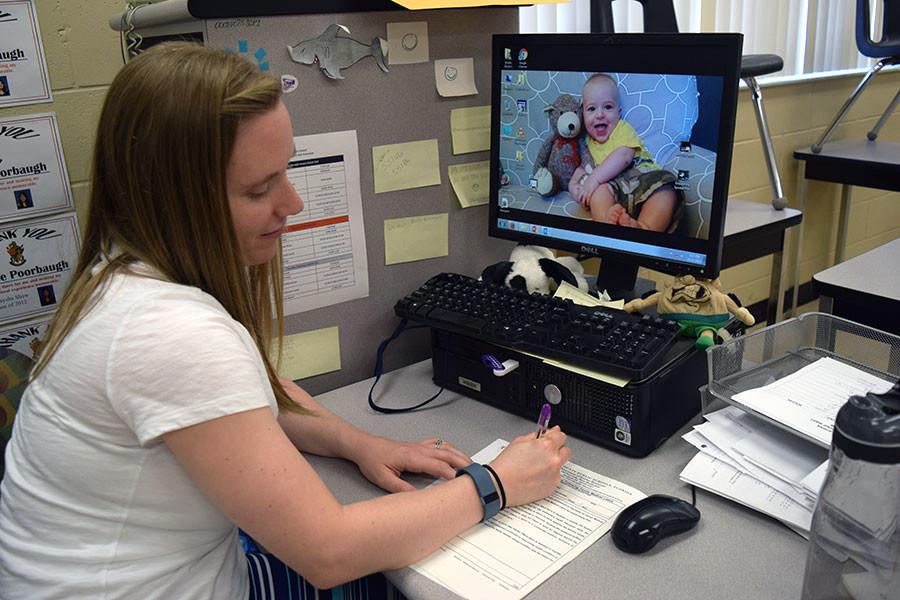 Students may think that they are the only people on campus who are going through big changes, but this is not the case. There are many teachers on campus who are transitioning into an important phase of life: parenthood.

A big step in the process of maternity leave is the preparation for their hiatus. All of the mothers must arrange their lesson plans for the time they are out, which is around eight to twelve weeks. Advanced Placement Biology and Pre-IB Biology teacher Mrs. Robin McCarter says, “The prep. . . is definitely demanding, but I made that investment because I care about my students. I wanted them to succeed and not to worry.”

Advanced Placement Human Geography and pre-IB World History teacher Mrs. Nicole Broder recounts, “Around four months before I left, I started getting all my lesson plans ready. It was mostly making sure I had all of the stuff figured out. I am quite. . . let’s say. . . particular about how I teach, so I wrote notes with lots and lots of detail. That took quite a bit of time. My due date was around the time when we would usually start review, so I could have just done the regular schedule, but in order to have some review with the kids, I cut out a bit of the extra activities I would usually do.”

As D-Day nears, the mothers-to-be must then turn in the application for Leave of Absence with the “Family/Medical Leave” box checked, along with the Agreement to Resume Active Status Following Medical Leave form.

English I teacher Mrs. Emily Padilla adds, “There’s paperwork to file for family medical leave and for maternity leave and for stuff like that. There’s a lot of prep work. You have to make sure that you have [everything] in order so that if you end up going into labor, your kids are going to have something to do and that they know what to do once the sub gets there.  They are currently processing my paperwork, so we’re still working on that.”

One of the most variable steps in the process is assigning a long-term substitute to take over. Even between the four teachers interviewed, the differences in each person’s experience was mostly due to what type of sub was available to them. Seasoned pro Mrs. Cindi Welscher has had a fairly painless experience her third time around, as the scheduled substitute taught her two classes, Advanced Placement Statistics and Math Studies, the twenty years prior to her arrival at Seminole.

“I’m really thankful because I don’t have to prepare too much this time. The first time was really hard because I hadn’t been teaching for very long. All I could really do was start them off, but after about a week, you can tell them where to be. The second time wasn’t bad at all because my due date was May 17, so we were already drawing to a close.”

Others are not quite as lucky; In fact, Welscher hit the lottery. Many teachers are often left in limbo with many different proposals that are likely to fall through at any point. Padilla has only a few weeks before her departure and still doesn’t have a clear substitute; McCarter had three replacements spanning her two-month break.

A teacher’s life in and out of school never really returns to what it once was. Upon returning from maternity leave, the teachers have had to shape their schedules around their kids, and as Broder says, “I don’t even know what I did or complained about before I had Ethan [my son].”

A teacher mother’s schedule at school changes considerably as well. Welscher describes, “[I’m] always here in the mornings because that is when my  kids are asleep and it doesn’t really affect anybody else to do a lot of my  schoolwork in the morning.” McCarter has now had to cut down the days she is available from every weekday to only one due to the demands of a newborn.

Hopefully the student population will realize they are not the only ones staying up to inane hours and who are sleep-deprived, and will learn to respect the amount of work teachers have, especially those who have other responsibilities.