TEEN ACTIVISM IN THE AGE OF COVID-19 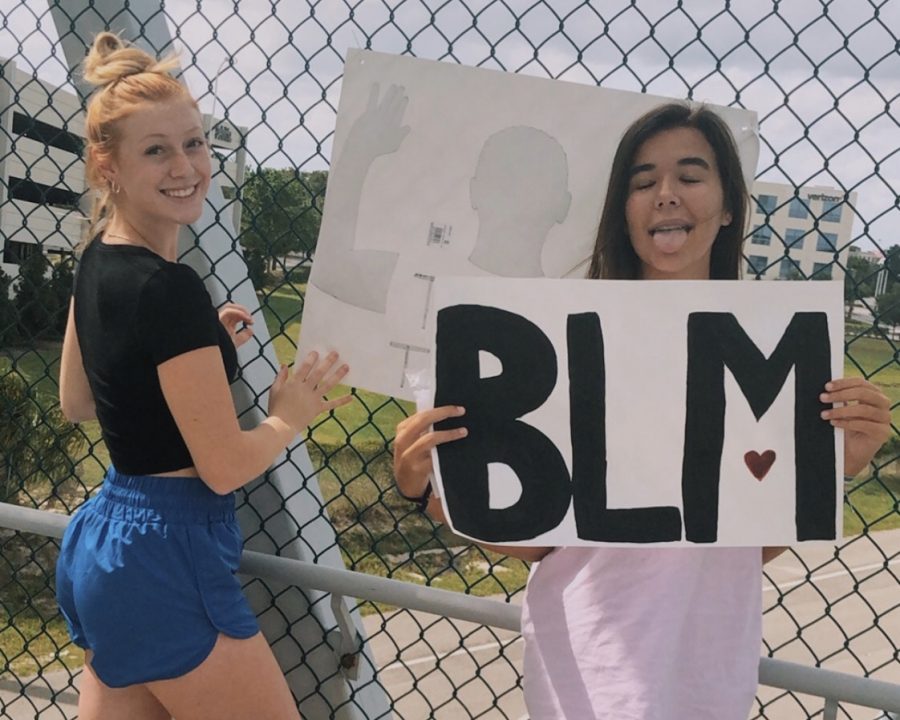 The year 2020 has involved some life changing events, an important one being the Black Lives Matter Movement. In this picture you see seniors Payton Whitney and Maddie Cannon with posters they made as they hang them over the city of Lake Mary. They did this to show their support and spread awareness to the movement as many other people are doing, whether through protests, donating, and or making signs like shown.

During the confusing and ever-changing global pandemic, students have grown more and more involved in activism; Young adults are increasingly concerned with human rights issues, politics, and world conflicts. The world has seen our generation take charge and make a difference in many areas, including the Black Lives Matter Movement, Lebanon relief, and the Yemen Crisis.

There is no specific starting point to the uptick in teen activism, but the increase in instagram story post and tiktok posts about justice and reform over quarantine show that these teens have used their extra time to become more involved in the world.

The BLM movement has inspired young activists not only in the United States, but the entire world. The movement existed long before quarantine, but the murder of George Floyd on May 25 sparked a chain of protests and demonstrations across the country.

“I think there has been a really big new wave of activism for the BLM Movement after the George Floyd incident… teens were especially enraged about what happened and were moved to try to eliminate the systemic racism we have in this country,” offers IB Senior Chloe Sakr.

As  protests continue to become increasingly popular, people have the  chance to look back on other cases involving police brutality and demand justice. Such protests involve demanding reduced funding, reform of police departments, new policies against choke holds and no-knock warrants, and the demand for the prosecution of the police involved in the death of Breonna Taylor amongst countless other victims. Not only are people protesting, but they are using petitions and social media to spread awareness and gather donations.

“Personally, since June, I have signed close to 50 petitions, donated to many BLM organizations, and took it upon myself to educate both myself and others about the racism in our country,” says Sakr, who has been doing this through conversation with her family and social media. The link below will take you to similar resources:

Before America’s advocacy for aid to Lebanon over quarantine, the country had begun a revolution in October 2019, according to The New Yorker. The people of Lebanon  demanded change within their government including management of resources and aid in their economic situation, which has devolved into a crisis.

With the country being on the verge of starvation, many teenagers on social media began noticing the crisis. Pictures of malnourished children circled the internet, raising awareness of Lebanon’s citizens.

When asked how she first heard about the crisis, Junior Farah Chowdhury answers “Honestly because of social media. I like to stay up to date with what’s going on as much as possible and social media is an outlet.”

On August 4th, there was an explosion in Lebanon’s capital, Beirut. This blast left many homeless and injured, and some dead. (BBC). They are still in desperate need of aid, and young people around the globe are demanding reform

“I think the crisis in Lebanon is very upsetting. The people of Lebanon deserve so much better… no country should go through that,” says Chowdhury. The best course of action according to her is “a good leader for America that can handle international affairs way better… [and] donating and spreading awareness to make actual change.”

Below, you can donate, sign petitions, and provide relief aid for Lebanon.

Yemen is going through a similar crisis, click the link below to learn more:

While the Coronavirus continues to spread, wildfires in California are quick to follow. According to CNN, 1.25 million acres of land in Calif. have been burned by the fires since August 15 (far into quarantine). Even before then, there have been deadly fires spreading throughout the state, displacing people who had to be evacuated. Additionally, many Californians cannot afford to find a temporary place to stay while the state’s firefighters attempt to control the wildfires.

More recently, snow-like ash has been falling from the sky, turning California’s once beautiful landscape into a dusty orange from all the smoke in the air. These fires can have massive implications on the environment and can inflict further issues such as contributing to the climate crisis.

There are multiple places to donate to relief efforts and many separate links for people who lost their homes. The governor has asked for federal aid as well as aid from other states. Fortunately, President Donald Trump has declared the fires a disaster and promised federal aid, despite his previous threats over the years to pull aid and let California suffer.

All of these subjects are very important awareness wise, but for most, we need to take it a step further, especially here in the U.S. Voting is extremely important in today’s society because of how divided American’s are on certain policies and the vitality of voter representation. Each vote is crucial to make the change that you truly want to see. Electing representatives that have the same views as you is part of that change.

“I think it’s important for Americans to take advantage of their right to vote- their right to have some form of a voice in how they want to be governed,” states IB Senior Nicole Wilkes.

A lot of people in the U.S. choose not to vote because they feel that it is not significant. Unfortunately, this is the case for enough people every four years that non-voters can make an indirect change in the outcome of an election.

“To sit back and watch is like watching a house burn and doing nothing to save the people,” says Wilkes. She continues, “all in all, I just feel like people have a difficult time understanding the impact they can make, especially in ‘politically tense times’ when our fights seem flightless… we should work on educating ourselves about our beliefs and how to enact on them.”